A story of triumph for congenitally joined twin 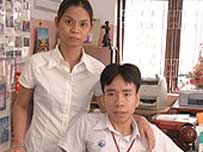 Once congenitally joined with his brother allegedly due to Agent Orange, one of the twins is set to marry this December at 25 years of age, famed after being successfully separated in 1988.

The success of the operation finally gave Nguyen Duc a new and independent life after being joined at the pelvis with a common digestive tract and three legs between the two boys. Duc came out of the operation with the only operable leg, and finds himself in love, and ready to get married.

Duc is computer technology specialist who works as administrative staff for the Tu Du hospital where he has received a wealth of support from the beginning. He now has a monthly salary of VND1.9 million (US$119), solid take-home pay for a disabled person in Vietnam. Duc said he met his girlfriend Tuyen in April 2004 after the two had joined the Red Cross society to do charitable work and raise money and provide assistance for others in Hoa Binh Village.

Doctor Nguyen Thi Phuong Tan, director of the Hoa Binh Village said Duc is an example of the fact that anything is possible in life, an energetic man despite his disposition. “Duc has persevered since he was young,” recalled the doctor. “From a weak little boy, Duc struggled to overcome illness and obstacles to become a man with great computer skills and now marriage.”

Duc said his wedding party will be organized on December 16, 2006 at Bao Tran restaurant in the city-based Thuong Xa Tax shopping center in District 1 on Nguyen Hue street. The wedding party is to be sponsored by Japanese company, Yasaka.

In 1981, a young woman in Sa Thay district of Kon Tum province in Vietnam’s Central Highlands, gave birth to the unusually deformed twins, which has been attributed to coming in contact with Agent Orange.

Kon Tum, where the twin’s mother had lived during American War was an area that the Americans sprayed heavily from 1962 to 1970 with the herbicide that contains the highly toxic and stable chemical called dioxin – the source of Agent Orange causing deformities.

Seven years later, twin Viet contracted encephalitis – an inflammation of the brain, and doctors decided to separate them to prevent the other healthy boy from contracting the disease.

The operation started on October 4, 1988 at the Tu Du hospital with a squad of leading Vietnamese and Japanese surgeons and lasted some 12 hours, with Japan providing the expertise, tools and technical equipment. The success of the operation was a first in Vietnam and only the seventh of its kind in the world.

After the operation, Duc traveled to Japan many times for rehabilitation operations, availing him his present healthy state. The surgery gave Duc a better life, while his brother Viet suffers from brain shrinkage and has been bed-ridden his whole life.